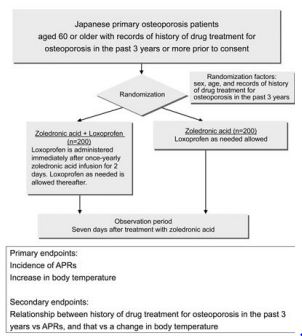 Treatment of osteoporosis with once-yearly zoledronic acid was approved in September 2016 in Japan. Like other bisphosphonates, zoledronic acid causes acute-phase responses (APRs), which are more severe in Asian populations than in multinational populations. The aim of this multicenter, randomized, open label, parallel group study is to investigate the incidence of APRs in Japanese patients with primary osteoporosis in real clinical settings, and to test the hypotheses that APRs are suppressed by administering one of the most commonly used nonsteroidal anti-inflammatory drugs in Japan, loxoprofen, immediately after the treatment with zoledronic acid, and the incidence of APRs in patients with prior history of treatment with bisphosphonate is lower than that in naïve patients. A total of 400 patients aged 60 or older were randomly allocated to a zoledronic acid plus loxoprofen group or zoledronic acid group on a 1:1 basis. After the treatment, patients were observed for 7 days, during which patients will record APRs for the first 3 days, and body temperature and drugs taken for 7 days. Primary endpoints are incidence of APRs and increase in body temperature, and secondary endpoints are relationship between prior treatment for osteoporosis in the past 3 years versus incidence of APRs, and that versus a change in body temperature. Results supporting the hypotheses will indicate that APRs are manageable with loxoprofen, which patients likely already have, and the APRs will develop less frequently and be less severe in the following years, despite the high risk of APRs in Japanese patients.

Нe bisphosphonate zoledronic acid sLgnLficDntly increases bone mineral density and suppresses the incidence of fractures. In Japan, zoledronic acid (intravenous 5 mg once-yearly) was approved for the treatment of osteoporosis in September 2016. Compared to other bisphosphonates, such as alendronate, risedronate, and ibandronate, which are administered to patients once-daily, weekly, or monthly, once-yearly treatment with zoledronic acid is expected to achieve high compliance with sLgnLficDnt eٹcDcy in the treatment of osteoporosis in Japan. However, also like these other nitrogen-containing bisphosphonates (alendronate, risedronate, and ibandronate) zoledronic acid is associated with a high incidence of acute-phase reactions (APRs), including pyrexia and myalgia, for 3 days Dіer the administration.

Нe Health Outcomes and Reduced Incidence with Zoledronic Acid Once Yearly Pivotal Fracture Trial (HORIZON-PFT) and subsequent sub-analyses have shown a higher incidence of APRs in the Asian populations compared to those in the multinational populations included in the studies [1,3,4]. A sub-analysis of the HORIZON-PFT showed that the incidences of pyrexia and arthralgia in the Chinese population were higher than those in the multinational population, of which 14.2% were Asians (pyrexia, 28.2 vs. 16.1%; arthralgia, 21.5 vs. 6.3%). Нe highest risk of developing APRs was reported in the non-Japanese Asians and 3DcLfic Islanders (odds ratio: 2.20 and 3.39). 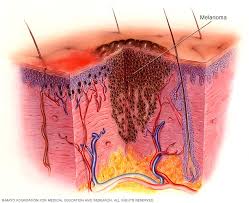